By now you should know pretty reliably that when the blog goes quiet for this long, either I’m having a really boring, uneventful time, or life has gotten unusually crazy. Right? And (yes, I already hear you snickering), you also know that I seem to be constitutionally incapable of having a boring uneventful time.

So let me tell you about this story I’ve been working on. Here’s the premise: a suburban Silicon Valley family who knows nothing about, say, agriculture, finds that they have, through a series of individually plausible garden-path steps, purchased a 77 acre farm up in the Pacific Northwest. Hilarity ensues.

So, yeah. We did that thing. This is probably not all that much of a surprise for folks who’ve chatted with us over the past six months or so. We’ve been visiting Port Townsend for a couple of years now, and it wasn’t all that long before we started thinking “Hey, wouldn’t it be great to find a little cottage out on the bluffs that we could use as a family retreat up here?”

We got into the habit of meeting with our real estate agent/friend John every time we visited, spending a day or so of our visits tromping around and looking at houses and lots that seemed to match what we thought we were looking for. It was a lovely excuse to explore the peninsula and spend time with John and his family.

When John forwarded the listing for the Swanson Farm last fall, he said something like “I know this isn’t what you’re looking for, but I’d be remiss if I didn’t let you know it was on the market.” There was no point in even looking at it. It was a farm, for Bob’s sake. We weren’t looking for a farm. We were looking for a little hideaway overlooking the water.

Besides, everything we knew about farms we’d learned from folksongs, and none of it was good. Farms took long, long hours of backbreaking work. They sucked your life savings dry. They ruined your health, your relationships and your faith in justice. And then they still failed. I mean, think about it: are there any folksongs where the farm doesn’t fail and people don’t either die right off or live out the rest of their lives as crushed, hollow shells of their former selves? I recognize that people sometimes do stupid, romantic, idealistic things based on folksongs, but those are folksongs wheregood things happen.  But a farm? There’s not even any humor left in asking the rhetorical question of “What’s the worst that could happen?”

And yet. And yet.

And yet from the first moment that we walked down that broken fencepost road and looked out on its gently rolling hills, it…just spoke to us.

We immediately started referring to it as the “Terrible Idea Farm” because, after all, it was a terrible idea. We shouldn’t even be thinking about buying that much land. Not to mention a barn in need of a lot of work and a house that was so far beyond help that not even Sarah Palin could have seen it from her backyard.

But on subsequent trips, we kept coming back to it. Kept wandering the overgrown lane that led out to the western pastures. Kept going down to the pond. Kept watching the hummingbirds that buzzed around the old creamery building, and the hawks that hunted for field mice under the old willow.

And we started having conversations with folks around town. With Sarah and Owen at the Land Trust, and Craig at the Conservation District. With half the city planning board. With Susan and John and Karen and probably most the organic farmers on the Quimper peninsula. With Kees, the ecovillage developer and former mayor. The State Water Board. The Economic Development Council. An architect. A bunch of folksingers, just for balance. And we just kept talking to people and kept going back and looking at that Terrible, Terrible Idea that we just couldn’t walk away from.

Most people know the Terrible Idea Farm as the “Swanson Farm,” because, well, it belonged to the Swanson family (who probably didn’t think it was all that terrible an idea). Mr. Swanson ran cattle on it until he passed away a decade or so ago, and his wife remained there under the care of her neighboring daughter and son-in-law until last year. But her will specified that the farm be sold and the proceeds divided up among their three children, so there it was, on the open market.

I accidentally found myself chatting with the daughter early on in the falling-in-love-with-the-land process. It was an accidental contact – she and her husband are very private people, and conventions of the real estate industry have evolved to erect an impenetrable barrier between buyer and seller, if only to ensure that their respective agents have absolute control over any information passing between the two.

So this was an accidental contact. But once we started talking about the history of the land, and what it was like for her growing up there, I guess I was sunk. I fell even more in love with the idea of it, with the idea of this deep sense place, and with the idea of preserving and being a part of it. One thing led to another and well, here we are.

Anyhow, I’m sure you have a lot of questions. I’ll try to head things off by confessing that the answer to most of them is “We have no idea.” But here, at least, is a start:

Where is this place?

Street address is 3057 7th St, Port Townsend WA 98368. Map here:https://goo.gl/maps/3icmq9Dmceq – it’s that big open rectangle right on the edge of town (the property is actually half in Port Townsend and half in unincorporated Jefferson County, further accentuating the hilarity of dealing with regulatory agencies). 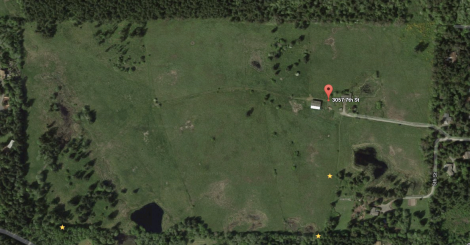 What are you going to do with all that land?

We have very little idea. But we’re committed to keeping it as open land that provides benefit to the community and respects its history as a family farm. Long term, we’re hoping to put together some sort of plan that provides low-cost land leases to young farmers in the area who are trying to get started. We’re also hoping to work in some sort of educational component. Maybe some day it will be something like Ardenwood Farm that we have down here in the Bay Area. Maybe not. We’re still figuring this out.

Are you moving up there?

No. At least not for a while. We’re committed to being in the Bay Area for at least a few years yet. Besides, for now there’s really not even an actual place to move to (see below about “Can we come stay with you?”). Longer term, we don’t know. We’re still looking at this mostly as a family/friends retreat. To that end, we’re working pretty hard at enlisting local folks who actually understand farms and the Port Townsend community to provide us the on-the-ground help we’ll need getting things up and running.

Can we come stay with you?

Heh. You know those five-page home inspection forms with a box where the inspector puts in a little check mark if something is okay, and an “X” if it isn’t? The report was hilarious. A decade plus of deferred maintenance in a climate like this… In short, everything that could be wrong was. Plumbing in imminent danger of bursting, electrical ready to set the place on fire at every flip of the switch, foundation literally teetering on a haphazard collection of oddly-shaped rocks pushed under the posts. The roof, the joists, the antique septic system…. We’d started calling it The Danger House on our first visit; it wasn’t until we got the inspection report that we realized how close to the mark we’d hit (anyone else remember The Hereafter Hilton, from Omni Magazine way back when?)

But we expect that once the Danger House has been dealt with – honestly, with a flick of the lights, the whole thing might just take care of itself – we’ll eventually have a small, comfortable and non-lethal place to stay out there. And when we do, we’d be delighted to host you.

That’s not a question. But here you go: 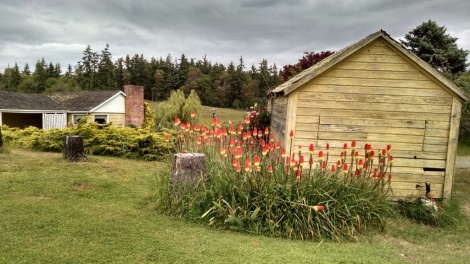 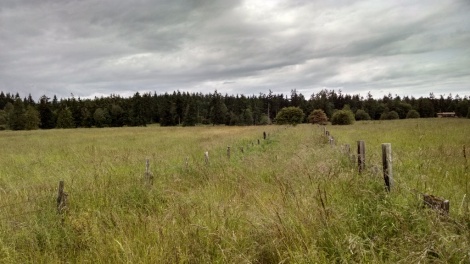